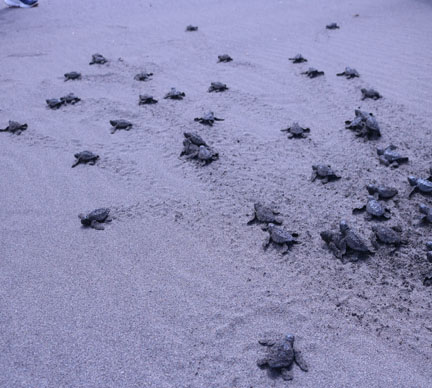 A total of 683 newly hatched Olive Ridley marine turtles (Lepidochelys olivacea) were released in the shores of Sariaya, Quezon after emerging from its protected nesting sites in the barangays of Bignay II, Castañas and Guisguis-Talon early in January 2023.

The hatching of wildlife was reported to the DENR-Community Environment and Natural Resources Office (CENRO) Tayabas City through the Office of the Municipal Agriculturist (OMA) of Sariaya and the barangay local government units. Being the DENR field office with the jurisdiction over the established marine turtle nesting sites in the municipality, the CENRO is consistently coordinating with the OMA, Bantay Dagat, and barangay and municipal offices in the monitoring of the said area.

CENRO Tayabas continuously reminds the public that based on the Department Administrative Order No. 2019-09, Olive Ridley is listed and designated as "Endangered" and must be protected under the Republic Act No. 9147 also known as the Wildlife Resources Conservation and Protection Act of 2001. Hunting, collecting, possessing, and poaching of its kind is punishable under this law.###