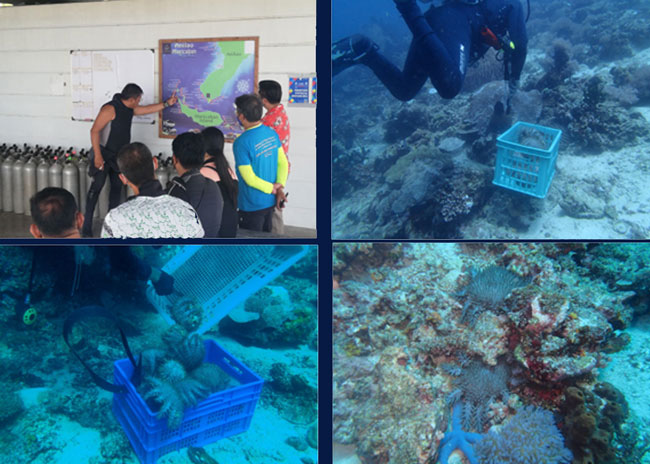 Calamba City, Laguna – DENR CALABARZON, together with the Calaca and Lipa CENR Offices, in partnership with the Local Government Units (LGUs) of Mabini and Tingloy, Batangas spearheaded the extraction and collection of the Crown-of-Thorns Sea stars (COTS) last April 1, 2022. An outbreak of COTS were reported within the Mabini-Tingloy area of the Verde Island Passage (VIP) in Batangas Province. The proliferation of these voracious corallivores causes a big threat to coral reefs, not only in VIP but in tropical countries around the globe. Moreover, the Anilao MACRO Spotters Association Inc. - an organization of divers in Anilao, Mabini, Batangas and freediver volunteers from Batangas Varsitarian in Tingloy took part in the said event.

With sizes that range from 15-70 cm in diameter and with an average of 10-18 thorny arms, approximately 1,500 COTS were collected during the activity which is equivalent to six (6) 80-liter drums. Based on the initial evaluation, the collection area has an average of about 2-5 COTS per square meter. According to the Great Barrier Reef Marine Park Authority (GBRMPA) with roughly 15 COTS per hectare can be considered an outbreak.

There have been three (3) prior collection activities conducted by volunteers in the area, and had collected almost the same amount, if not more than.

The Crown of Thorns Starfish (COTS) (Acanthaster planci), is a large seastar that feeds upon hard, or stony coral polyps. Its name is derived from its venomous thorn-like spines that cover its upper surface. Dense aggregation of COTS can strip a reef 90% of its living coral tissues and this can indirectly affect fish populations that depend on coral reefs for habitat.

Among the causes behind the COTS outbreak is the loss of its natural predators (e.g. Triton’s trumpet, Napoleon wrasse, white-spotted pufferfish, titan triggerfish) that keep its population in check, as well as the continuous rise in sea surface temperature due to climate change exacerbated by various anthropogenic activities (e.g. improper waste management, deforestation, agricultural land run-off, overfishing). ###