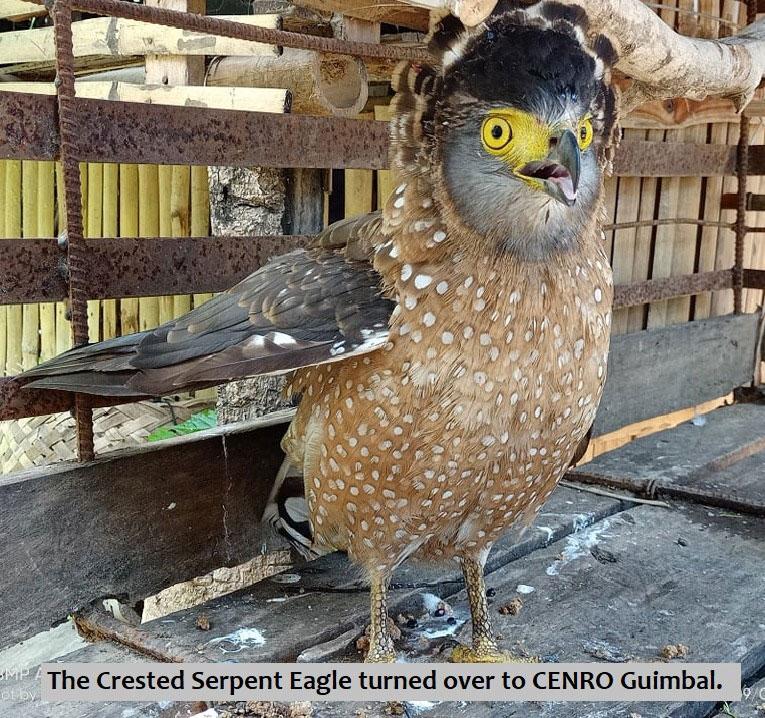 A Crested serpent eagle was turned-over to CENRO Guimbal, recently.

Geerazel P. Nieles, a resident of Brgy. Diday, Miagao, Iloilo found the raptor and turned-over it to the Municipal Environment and Natural Resources Office (MENRO) in Miag-ao.

The wildlife was found in good condition after the initial inspection and kept safe at the DENR Wildlife Rescue Center in Brgy. Kirayan, Miag-ao, Iloilo. It is now ready for release in a nearby forest in the area.

“To save our wildlife species, we should conserve their habitat as its destruction threatens the species. We could help reduce the threats by planting trees, restore wetlands and rivers, and clean up the beach or coastal areas. Our environment also needs some tender loving care as we continue the battle to contain the coronavirus disease (COVID-19),” regional executive director Francisco E. Milla, Jr.

The Crested serpent eagle (Spilornis cheela) is a medium-size raptor found in forested habitats across tropical Asia. There are several variations of the species and they have large looking head with long feathers on the back of the head, giving a crested appearance. Its face is bare and yellow joining up with the beak and has feet that are heavily scaled but has no feathers.

Crested serpent eagles would usually hold their wings in a shallow V shape. Its juveniles are distinguished by a much more while plumage especially around the head.

They are usually seen in the edges of forests and river valleys where they can soar and effectively hunt. They are also seen soaring over a territory in pairs and shrill often with a loud and familiar three or two-note call. Serpent eagles can tolerate a great deal of disturbance to their habitat and are primarily found near secondary forests.

It was considered Least Concern (LC) by the International Union of Conservation of Nature’s (IUCN) Red List.

Enhance biodiversity conservation is among the top ten DENR priority programs and projects of Environment Secretary Roy A. Cimatu./ DENR6/ASCC/JLR/LGGL