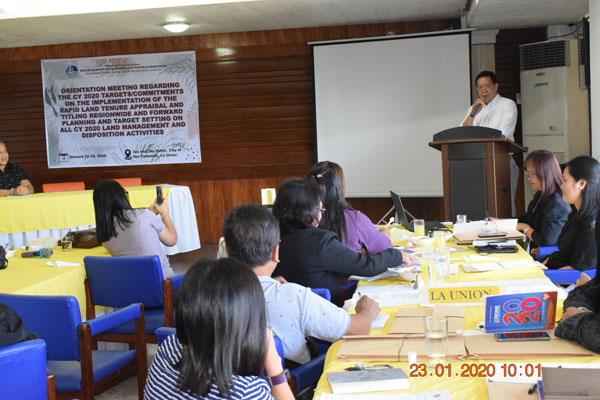 The Department of Environment and Natural Resources Region 1, in its bid to improve the lives of Filipinos by way of giving them security in land ownership, conducted the region-wide orientation of all land management officers on Rapid Land Tenure Appraisal (RLTA) and Land Titling.

RLTA is a barangay profiling activity designed primarily in cities and municipalities covered by Cadastral Surveys done more than 20 years ago. The activity will reveal how much of the remaining untitled lots are readily available and workable for titling.

Regional Executive Director (RED) Atty. Crizaldy M. Barcelo urged the participants to become advocates to ensure the attainment of the Philippine Development Plan 2020 commitment which is to issue a total of 360,000 agricultural and residential patents by the end of 2022.

According to RED Barcelo, to be able to contribute in the PDP commitment, “leverage on where you can shine and bring out our potential.” He also encouraged the participants to be honest in presenting their accomplishments as he despised misrepresentation and fabricated reports as these will be validated in the future.
RED Barcelo is optimistic that with this orientation, DENR Region 1 will equip all those involved in lands management and administration in attaining the region’s targets including the other major programs and projects of the DENR.

The acceleration of land titling is a priority of the current administration. However, there is difficulty in accurately identifying the actual number of the remaining untitled A and D lands from the cadastral records of DENR alone.

This is especially true for areas surveyed 20 years ago or earlier since many lands were informally transferred and subdivided by the heirs of the owners. The situation is further aggravated by the fragmented records from other agencies that have their own land titling activities. With the Rapid Land Tenure Appraisal, titling can be done more accurately and faster. RAS/RPAO