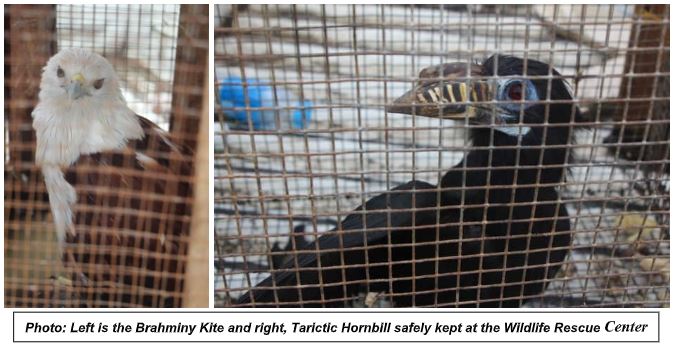 A Brahminy kite eagle locally known as Dapay, and a Visayan Tarictic Hornbill called Tariktik were voluntarily turnedover to the Community Environment and Natural Resources Office (CENRO) in Guimbal on July 26, 2019.

Reyme C. Gallarda, a teacher at Iloilo National High School, La Paz, Iloilo City surrendered the two birds after these were held in captivity inside the school’s park for years. According to Gallarda, he has cared for the species after its previous owner, Rainier Apistar, passed away eight (8) years ago.

The school principal voluntarily gave the wildlife to CENRO Guimbal Wildlife Traffic Monitoring Team which brought these to the Wildlife Rescue Center for safekeeping. It was verified that the school does not have a legal authority to keep the species.

“Please turn over and report to DENRany captured wildlife species so that we can make immediate action,”Milla said.

TheBrahminy Kite (Haliastur indus) is listed as “least concern” by the International Union for Conservation of Nature (IUCN) but its population is on the decline especially in Southeast Asia.

The Tarictic Hornbill (Penelopies panini) is listed as endangered per DAO 2004-15 Establishing the List of Terrestrial Threatened Species and Other Categories and in the List of Wildlife Speciespursuant to Republic Act (RA) No. 9147otherwise known as the Wildlife Resources Conservation and Protection Act of 2001.

RA 9147 states that seized wildlife species that are classified as endangered and critically-endangered, and found to have no corresponding authorization documents for trade, transport and possession shall be confiscated by the government./DENR6-CENROGuimbal