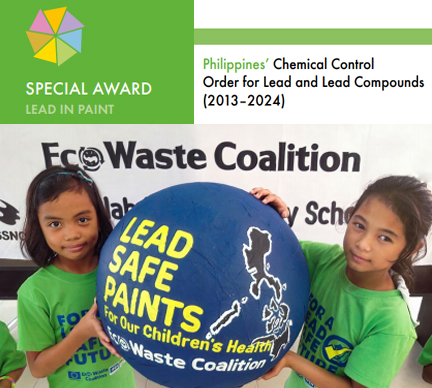 The Department of Environment and Natural Resources (DENR) has won the Special Award for its policy on lead in paint in the Future Policy Award 2021—dubbed as the "Oscar on Best Policies."

On June 29, Germany-based World Future Council (WFC) announced that DENR's Administrative Order (DAO) No. 2013-24 or the Chemical Control Order for Lead and Lead Compounds is one of the five recipients of the prestigious award.

The Philippines is the first Southeast Asian country to receive the award.

Secretary Roy A. Cimatu said the award marks the DENR’s major feat towards a lead-free country.

"We cannot be any happier with this great news. This is a landmark achievement of the DENR as we campaign for a lead-free country," Cimatu said.

The DENR chief also underscored that the award is an indication that the Philippines is on the right track in regulating, phasing out, and banning chemicals for the serious risks it could bring to public health and the environment.

"As I have mentioned before when we were announced to have been shortlisted, this just goes to show that we are doing right in our campaign to prevent the serious risks of materials with lead content could pose to public health and the environment," Cimatu pointed out.

Section 4 of DAO 2013-24 mandates the prohibition of the use of lead and lead compounds in the production/manufacturing of packaging for food and drink, fuel additives, water pipes, school supplies, cosmetics, and paints.

The policy has ordered the prohibition of the production of paints as a pigment, drying agent, or for some intentional use with more than 90 parts per million (ppm), which is set as the threshold limit.

The Philippines is among the three recipients of the Special Award alongside Sri Lanka and Colombia for their policies on highly hazardous pesticides and environmentally persistent pharmaceutical pollutants.

Meanwhile, Kyrgyzstan’s resolution on approval of chemical hazard classification system and hazard information requirements and Sweden’s phase-out lists for chemical hazardous to the environment and human health were given the Gold Awards.

The Future Policy Award is the only award that celebrates legislation and policies for the benefit of current and future generations at the international level.

A total of 55 policies from 36 countries were nominated for the award.

The WFC research team came out with the 12 shortlisted policies in May.

The five winning policies will be recognized through an online awarding ceremony on July 6 at 10 p.m. (Philippine time). ###

Dredging operations to open an eight-kilometer common navigational channel from the mouth of Cagayan River have officially started on June 25.

Department of Environment and Natural Resources (DENR) Secretary and Task Force Build Back Better (TF BBB) chair Roy A. Cimatu said the extraction of silt will enable the rehabilitation and reopening of the Aparri port, which has not been operational for over 10 years.

"This forms part of the Duterte Administration's program to rehabilitate the country’s important vital river systems in disaster prevention while restoring their importance as vehicles of progress to the country’s economy," Cimatu said during the groundbreaking ceremony in Barangay Toran in Aparri, Cagayan.

Last February 17, the DENR through the Inter-Agency Committee on the Restoration of the Cagayan River has signed a tripartite memorandum of agreement with the Great River North Consortium and Riverfront Construction for the dredging and maintenance of the navigational lane.

"The dredging activity targets to deepen the mouth of Cagayan River to about 12 meters from its present depth of only four meters to significantly improve the river flow from the upstream portion. Consequently, it will prevent or minimize the likelihood of flooding in areas along its path covering the provinces of Nueva Vizcaya, Quirino, Isabela, and Cagayan," Cimatu said.

Cimatu said the operation also complements TF BBB’s efforts to clear the Cagayan River of sandbars, three of which are prioritized to be fully removed by August.

The DENR chief, together with Department of Public Works and Highways Secretary and TF BBB co-chair Mark Villar, inspected the sandbar clearing operations in Lal-lo, Cagayan before proceeding to the groundbreaking ceremony in Aparri.

The DPWH had identified a total of 19 sandbars for removal but immediate dredging was recommended for three sandbars, which considerably obstruct the flow of floodwater to the Aparri Delta draining to the Babuyan Channel.

"Granting favorable weather conditions, we are optimistic to finish the removal of all three sandbars within the year or in August, at the earliest," Cimatu said.

The removal of sandbars started in February 2021.

Cimatu said 86.33 percent of the sandbar in the Magapit Narrows in Lal-lo, Cagayan has been finished.

Meanwhile, the removal of sandbar in Dummun, Cagayan started last June 14. This involves the removal of an estimated 882,707 cubic meters of silt, which is expected to be completed within 170 days. ### 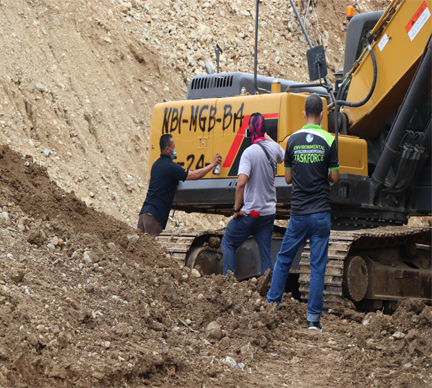 The Department of Environment and Natural Resources (DENR) has apprehended six individuals who were conducting quarrying activities in the town of Lian in Batangas province without the necessary permits.

Secretary Roy A. Cimatu said the apprehension of the quarry workers is "another proof of the DENR's continuing commitment during this quarantine period even when mobility restrictions are still impeding enforcement operations."

"The arrest of this group of individuals is also a testimony why we need an enforcement bureau in the DENR. Through this health crisis, we laud the continuing endeavors of the men and women serving the Environmental Law Enforcement and Protection Service (ELEPS) to apprehend the culprits," Cimatu said.

The DENR-ELEPS—together with the Environmental Crime Division of the National Bureau of Investigation, Armed Forces of the Philippines, and DENR-Mines and Geosciences Bureau in CALABARZON—has conducted a joint-surveillance activity to verify reports that quarry operations at Sitio Matuod, Brgy. Binubusan in the municipality of Lian was still ongoing despite the cease and desist order previously issued to the owner identified as Francis Limjoco III.

On June 24, the joint operatives were able to confiscate four units of backhoe and five dump trucks—including the illegally sourced minerals called andesite, a type of volcanic rock—with an estimated value of P32,038,500.

Based on the list of existing holders of Special Permit to Transport and Dispose of the Batangas Provincial Environment and Natural Resources Office, no transport permit was issued in Lian town.

The DENR-MGB in CALABARZON also issued a certification stating that there was no valid Mineral Production Sharing Agreement (MPSA) that was granted within the said municipality.

MPSA is an agreement wherein the government shares in the production of the contractor, whether in kind or in value, as an owner of the minerals. In return, the contractor shall provide the necessary financing, technology, management, and personnel for the mining project.

Section 103 of RA 7942 states that "any person extracting minerals and disposing the same without a mining agreement, lease, permit, license, or steals minerals shall be imprisoned from six months to six years or pay a fine from P10,000 to P20,000." ### 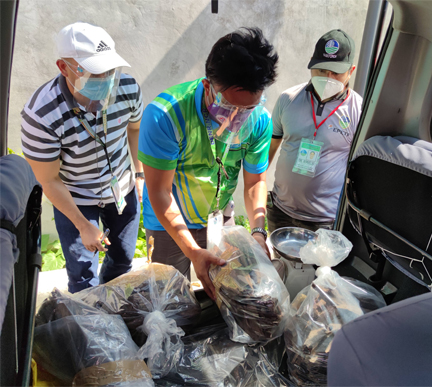 The operatives of the newly-formed Environmental Law Enforcement and Protection Service (ELEPS) of the Department of Environment and Natural Resources (DENR), together with the National Bureau of Investigation (NBI), have confiscated ₱2.9-million worth of agarwood from two illegal traders on June 15.

"But the real worth of the contraband is placed at ₱29 million, or at least 10 times more than its market value, if we will factor in the environmental services that were lost as a result of the illegal cutting of these threatened trees," Sorilla said.

Also recovered from the suspects were an Asian utility vehicle, cellular phones, and a weighing scale.

He said the DENR-NBI operatives started their case build-up against Espino and Avelino as early as November 2020, following information provided by a concerned citizen to the NBI Agent Habeas Corpus of the Environmental Crime Division.

Sorilla pointed out that determining the sum of all costs from an environmental crime should factor in the lost environmental services "to drive home the point that a standing tree is way far better than an apprehended undocumented tree."

"This is where Secretary Roy A. Cimatu's marching order to ELEPS is anchored. Our paramount objective is one of preemptive defense to deter the commission of environmental crimes by strengthening DENR’s institutional capacity to prevent illegal logging. But if we have to run after the perpetrators, then we will do it," Sorilla said.

The illegal trade of agarwood has resulted in the indiscriminate cutting of Lapnisan and Lanete, which are both included in the national list of threatened Philippine plants per DENR Administrative Order 2007-01, according to Rogelio Demelletes, Jr., DENR senior ecosystems management specialist and ELEPS officer.

"It is very difficult to tell if a tree has produced agarwood, and so this results in the indiscriminate cutting of Lapnisan and Lanete," Demelletes said.

Agarwood is a product of the growth of a type of fungal infection, called Phialophora parasitic, inside the heartwood of Lapnisan and Lanete

Once infected, the trees defend themselves by producing an aromatic resin called aloes, a dark and moist substance that slowly embeds into the heartwood through time, thus creating "agarwood."

Espino and Avelino are currently detained at the NBI detention facility in Manila while awaiting court proceedings for violations of Republic Act 9147 or the Wildlife Resources and Protection Act and Presidential Decree 705, otherwise known as the Revised Forestry Code of the Philippines. 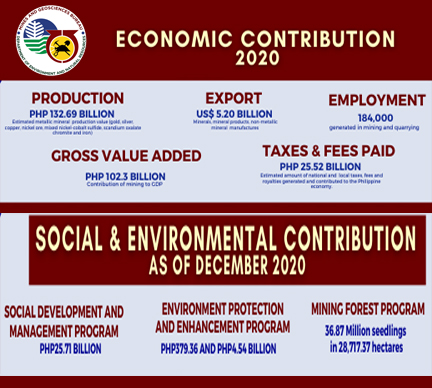 The Philippine mining industry contributed ₱102.3 billion to the Gross Domestic Product (GDP) in 2020 despite the challenges posed by the COVID-19 pandemic, according to a report released by Mines and Geosciences Bureau (MGB) of the Department of Environment and Natural Resources (DENR) on June 21.

The total value of minerals, mineral products, and non-metallic mineral manufacture exported in the past year was at US$5.2 billion.

Meanwhile, the minerals industry contributed about ₱25.52 billion from national and local taxes, fees and royalties.

The DENR-MGB also reported that the mining sector has allocated ₱379 billion for the implementation of the Environmental Protection and Enhancement Program as of December 2020.

It said the mining and quarrying activities generated 184,000 jobs and around ₱25.71 billion was committed for the Social Development Management Program (SDMP).

DENR Secretary Roy A. Cimatu said the report shows how the mining industry plays a "huge role in the country’s economic growth despite the pandemic."

"Amidst the pandemic that we are experiencing, the mining industry strived and did its part. We are happy to know that this has been the outcome of the mining operations in the country over the past year," Cimatu said of the report that cited the economic, social and environmental contributions of the Philippine mining industry.

"Contrary to what others are saying, this is an indication of how massive the contribution of the mining industry is to our economy," he added.

At the height of the COVID-19 pandemic in 2020, DENR-MGB Director Wilfredo G. Moncano instructed its regional offices to allow mining companies to realign their unutilized SDMP funds to support the affected impact and non-impact communities.

Cimatu has assured the public that the DENR will continue to strictly monitor the operation of mining companies and strengthen the implementation of their safety and health, environmental and social development, and management programs. ###