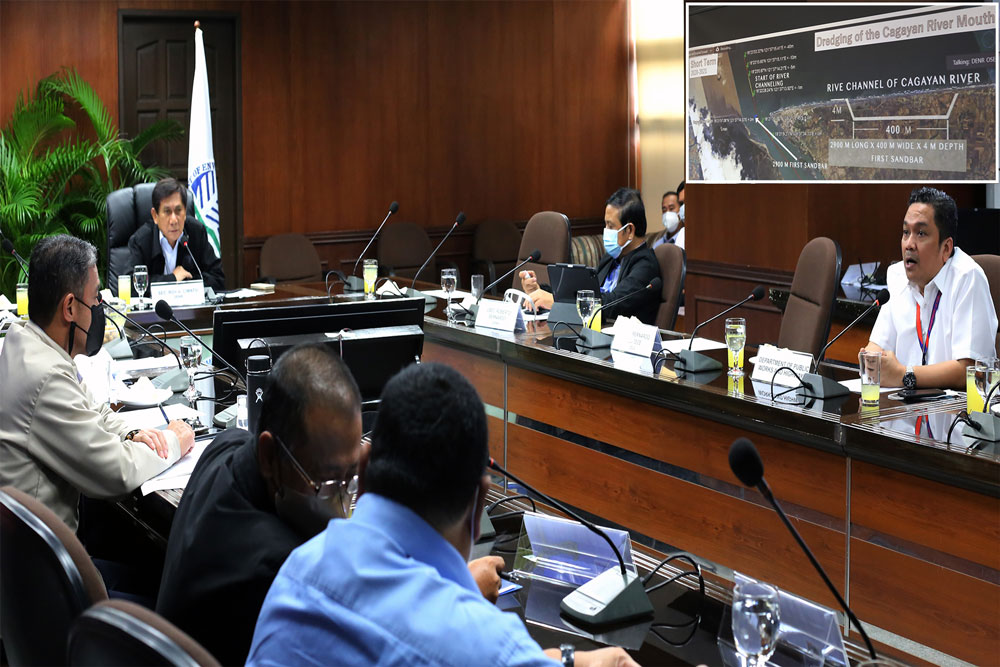 Department of Environment and Natural Resources (DENR) Secretary Roy A. Cimatu has approved the dredging of sandbars in 19 priority sites along Cagayan River as part of the immediate solutions to be taken to prevent a repeat of the devastating floods that inundated Cagayan Valley during the onslaught of Typhoon Ulysses last month.

“Removing these obstructions is the most immediate measure that should be undertaken to avoid a repeat of massive flooding in the region, particularly the provinces of Cagayan and Isabela,” Cimatu said during the Dec. 4 meeting of the Build Back Better Task Force, which he co-chairs with Secretary Mark Villar of the Department of Public Works and Highways (DPWH).

Cimatu said the dredging of sandbars “will bring immediate results in terms of improved water flow velocity while medium- and long-term solutions are being laid down.”

He said among the medium- and long-term solutions being eyed for Cagayan River are construction of flood control dams, installation of revetment structures along its slopes, and reforestation of its watershed and easement areas.

During the meeting, DPWH Undersecretary Roberto Bernardo assured the availability of 35 dredging and excavation equipment for the effort, four of these were already deployed in Tuguegarao City.

Of the 19 sandbars recommended by the DPWH as priority sites for dredging, four are in Alcala town and two each in Tuguegarao City and the towns of Enrile, Solana, Gattaran, Iguig, and Amulung. The municipalities of Aparri, Lallo, and Sto. Nino have one sandbar each.

Collectively, the 19 sandbars can yield a total volume of around 8.1 million cubic meters with a coverage area of 2.7 million square meter or 270 hectares.

“We should already begin removing these sandbars even while awaiting the selection of private contractors to do the dredging of the river,” Cimatu said, citing the urgency to rehabilitate the country’s longest river.

However, in areas with sandbars, the width averages to only 180 meters. The depth at the mouth of the river in Aparri now stands at three meters to as shallow as one meter in its estuary area.

“Pwedeng maglakad sa ibabaw (ng estuary) for a good 900 meters. It is imperative that we dredge the river mouth first,” Fano pointed out, adding that the river’s mouth is 1.9 kilometers wide.

Fano said “a good part” of Cagayan River has a steep river inclination of 18 degrees downstream, but 60 percent of the river has less than a slope of 18 percent to zero degrees.

In the same meeting, Cimatu stressed that anti-illegal logging operations need to put more focus on prevention and detection instead of confiscation.

He emphasized that authorities should regard confiscated illegally-cut trees “not as trophies but indications of failures to protect the forests.” ###