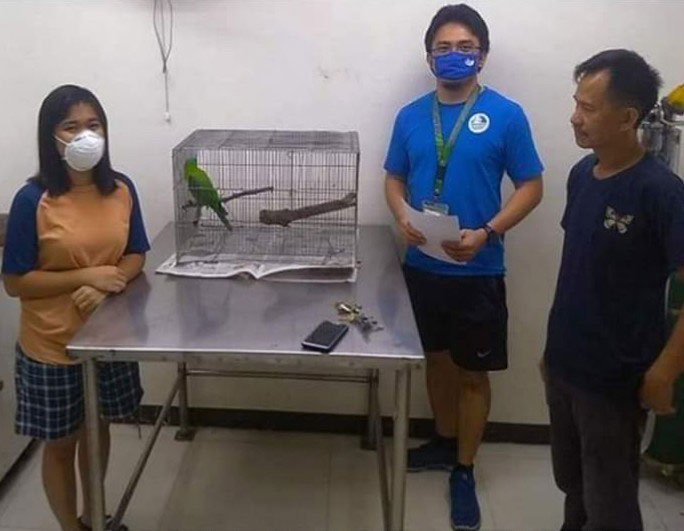 Environment Secretary Roy A. Cimatu has commended the wildlife officers who successfully rescued a blue-naped parrot in Manila during the enhanced community quarantine (ECQ) imposed in Luzon and other parts of the country to contain the spread of COVID-19.

“Our wildlife enforcers deserve a salute for their efforts to recover a national treasure – the blue-naped parrot that is endemic to Luzon and classified as ‘near threatened’ or may be considered threatened with extinction in the near future,” Cimatu said.

Cimatu was referring to wildlife officers from the Department of Environment and Natural Resources (DENR)-National Capital Region, led by Special Investigator Rey Florano.

On April 29, Florano’s team rushed to a condominium building in San Andres Bukid after receiving a call from a resident named Athena Parado about the presence of the bird in the premises.

After rescuing the fowl, the team turned it over to the Wildlife Rescue Center of the DENR’s Biodiversity Management Bureau in Quezon City for proper care and safekeeping.

Cimatu said the DENR will continue to fulfill its mandate of protecting the country’s flora and fauna despite the ongoing COVID-19 crisis.

The blue-naped parrot (Tanygnathus lucionensis) is included in the International Union for Conservation of Nature’s Red List of Threatened Species with “near threatened” status. This means that species may be considered threatened with extinction in the near future because of its decreasing population. ###