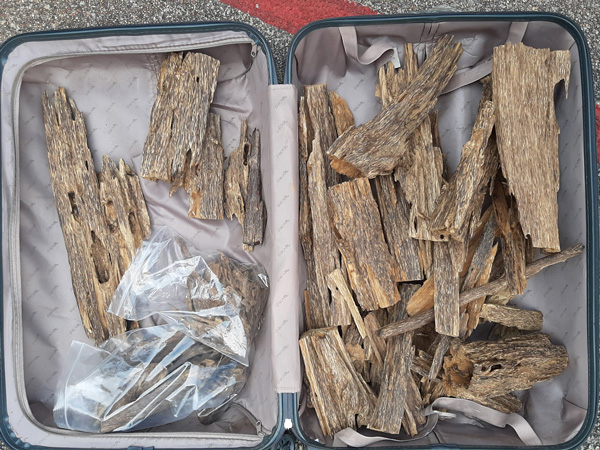 A Chinese national was arrested for illegal possession of some 14 kilos of agarwood valued at P2.5 million in Quezon City.

Qing Nan Lin was collared on October 11 by operatives of the Philippine Operations Group on Ivory and Illegal Wildlife Trade or Task Force POGI under the Department of Environment and Natural Resources (DENR) after a nine-kilometer pursuit operation that ended outside a Chinese temple at 81 P. Tuazon Street in Quezon City from the corner of Banawe and Calamba streets.

Environment Secretary Roy A. Cimatu lauded this move as he reiterated his call on the public to sustain the effort with the information they provide against illegal wildlife trade, adding that tips from concerned citizens are instrumental to the success of Task Force POGI’s operations.

“We can only go from strength to strength for as long as we can rely on increasing public vigilance against environmental crimes as shown by this recent arrest,” Cimatu said.

The contraband is now in the custody of the office of Task Force POGI in the Biodiversity Management Bureau (BMB) in Quezon City.

BMB senior ecosystems management specialist Rogelio Demellestes, Jr. said initial investigations point to the forests of Samar or Leyte as the sources of the of the rare wood.

“Reports also indicate that tree poachers operating in the forests of Surigao and Butuan are also sources of this priceless wood product,” Demellestes said. He added that the quality of the seized agarwood could be sold at P180,000 a kilo, at the least.

Also arrested in the sting operation were Jonathan Guzman and a certain Roberto Intes, both Filipinos.

“Our partners in the NBI-ECD are now checking their database to validate the identity of Intes who we suspect to be an Indonesian,” Demellestes said.

The three have been charged for violation of Republic Act (RA) No. 9147 or the Wildlife Resources Conservation and Protection Act, and Presidential Decree (PD) 705, as amended, or the Revised Philippine Forestry Code.

They are presently detained at the Detention Facility of the National Bureau of Investigation awaiting court proceedings.

“The trafficking of agarwood has spawned the indiscriminate cutting of Lanete (Wrightialaniti) and Lapnisan(Aquilariamalaccensis) trees,” Demelletes said, noting that high-grade agarwood could even fetch as much as P300,000 to P350,000 a kilo.

Lanete and Lapnisan are included in the national list of threatened Philippine plants and the list of wildlife species per DENR Department Administrative Order 2007-01.

Agarwood is a resin that is valued for its distinctive fragrance. It is formed when the host tree becomes infected with a mold called Phialophoraparasitica. The mold infection makes the tree produce a dark aromatic resin called aloes or aga in its heartwood.

The fragrant resin is used to make incense, perfume and medicinal products particularly in the Middle East and Asia.

Also seized in the operation is a brand new black Toyota Super Grandia Luxury van, with conduction sticker A5-C161, which Qing used in transporting the contraband. An improvised registration plate with number NA-8659 was also found inside the van.

Executive Order No. 277 authorizes the DENR to confiscate "all conveyances used either by land, water or air in the commission of the offense and to dispose of the same in accordance with pertinent laws, regulations or policies on the matter.”

The latest apprehension follows the operation conducted by Task Force POGI on October 10 where a certain Rommel dela Cruz was caught illegally selling five ball pythons and 13 tarantulas worth P106, 000 in Marikina City.

Task Force POGI is a composite team of wildlife law enforcers from various agencies including the DENR’s Biodiversity Management Bureau (BMB) and the National Bureau of Investigation-Environmental Crime Division (NBI-ECD).###