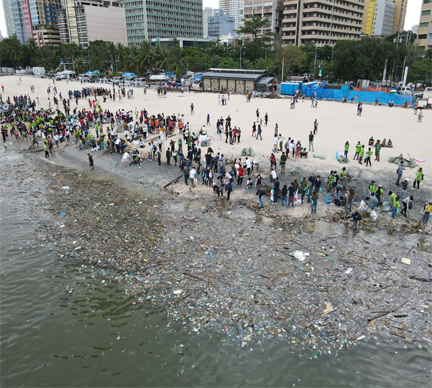 The Department of Environment and Natural Resources (DENR) spearheaded the cleanup of the Manila Baywalk Dolomite Beach on September 17, in celebration of the International Coastal Cleanup (ICC) Day 2022.

Over 4,000 volunteers took part in the cleanup activity that yielded at least 4,500 sacks of garbage.

Anchored on the theme “Fighting for Trash Free Seas-Pilipinas: Ending the Flow of Trash at the Source,” the event is one of eight DENR-led cleanup activities in Metro Manila in observance of the ICC Day, which is held annually every third Saturday of September.

“Volunteers from government, private organizations, and private individuals came to the Baywalk’s coastline with their own garbage bags as well,” de Villa said.

She said 3,000 of the 4,500 sacks were provided by the DENR Central Office through the Manila Bay Coordinating Office (MBCO), while 1,500 trash bags came from the DENR-National Capital Region, which includes the DENR-MEO West.

De Villa said that the Manila Baywalk reflects the collaboration among all sectors that is necessary to address coastal litter through targeted beach cleanup activities.

“However big and daunting the task is, we can make a difference by bringing communities and people together to clean up beaches. Proof of this are organizations and individuals coming together at the Baywalk Dolomite Beach,” de Villa said.

Data from the DENR-MEO-West, whose task is to oversee the maintenance of the 500-meter beach walk, has shown that 147,939 sacks of solid waste have been collected in cleanup activities held from July 12 to September 14.

During the period, a total of 83,109 sacks of water hyacinth were also collected, including 2,224 sacks of marine debris. ### 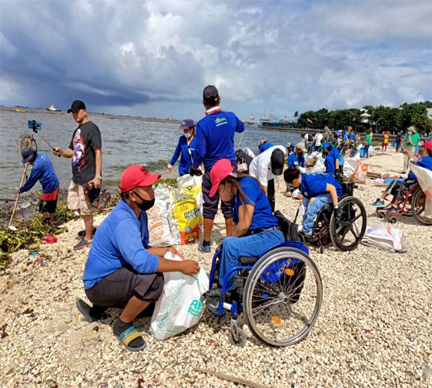 Workers with disabilities and senior citizens in the Department of Environment and Natural Resources (DENR) held a cleanup activity at the Manila Baywalk Dolomite Beach on September 14 in support of the local celebration of the International Coastal Cleanup (ICC) Day 2022.
With the theme “Where Coastal Cleanup, Special Treats and Selling of PWDs Eco-Friendly Handicrafts Jam Together,” the cleanup activity was part of a two-day event led by the Persons with Disability (PWD) Desk of the DENR-Strategic Communication and Initiatives Service (SCIS).
The activity supported this year’s ICC Day, with the theme “Fighting for Trash-Free Seas, Pilipinas!” and the Cerebral Palsy Awareness and Protection Week observed annually from September 16 to 22.
“We strongly believe that all of our employees, especially our senior citizens and PWDs, should have the same opportunity to engage in our advocacy efforts. This is largely in part of our commitment to an inclusive workplace,” said DENR-SCIS Director Khalil S. Bayam.
The DENR has been at the forefront of encouraging its employees and various stakeholders from all sectors to join the ICC since its proclamation in 2003 with the aim of making water bodies free of litter, raising awareness on marine pollution, and influencing behavior change among the public.
The DENR was joined by coastal cleanup volunteers from the Pasig City Persons with Disability Affairs Office (PDAO) and the Philippine National Women’s Wheelchair Basketball Team Lady Warriors – under the Philippine Sports Association for the Differently Abled – where one of its members is DENR-SCIS employee Cathreen Gem Tanyag.
On September 16, the DENR provided its PWD employees and senior citizens, and all DENR employees with special treats such as haircut, body and back massage, and manicure and pedicure through the Honorio MC Lopez Technical Institute, and sold a variety of PWD eco-friendly products from Caloocan PWD Zone Association and San Mateo Rizal PDAO.### 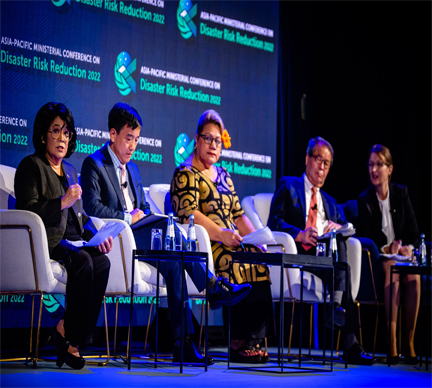 At the Ministerial Forum held on 19 September, Secretary Loyzaga stated, “Compound and cascading hazards and fragile systems urgently require fundamental shifts towards all-hazards, whole-of-society, transdisciplinary, and systems approaches to preventive risk governance that is inclusive, responsive, and adaptive.” The Secretary is the Head of the Philippine delegation to the APMCDRR 2022 composed of government officials and representatives from the private sector and civil society.

The Government of Australia and the United Nations Office for Disaster Risk Reduction (UNDRR) are co-hosting the APMCDRR 2022 from 19 to 22 September at the Brisbane Convention and Exhibition Centre. The Conference is the largest Asia-Pacific biennial gathering focused on disaster risk reduction, resilience, and the implementation of the Sendai Framework for Disaster Risk Reduction.

As a Panelist at the Plenary Session on Risk Informed Investments and Scaling Up Financing for Disaster Risk Reduction, the Secretary underscored that resilience is everyone’s business and highlighted the role of the private sector in ensuring that resilience is a core business value. She cited examples of corporations in the Philippines that have embedded resilience investments in their main operations and supply and value chains.

The Philippines’ vulnerabilities to disasters and the progress achieved by the country in preventing and responding to disasters through robust public private partnership have been recognized by government and civil society representatives in the APMCDRR. The Philippines committed to continue to strengthen its regional engagement to ensure the implementation of Sendai Framework for Disaster Risk Reduction. 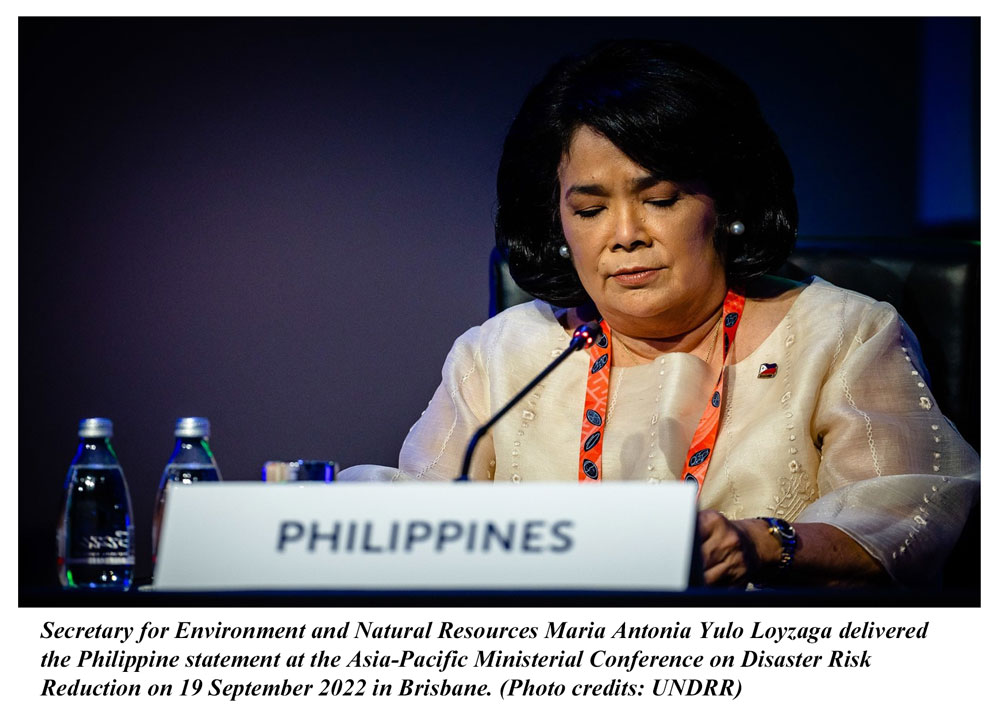 The Philippines and Australia to strengthen cooperation on disaster resilience 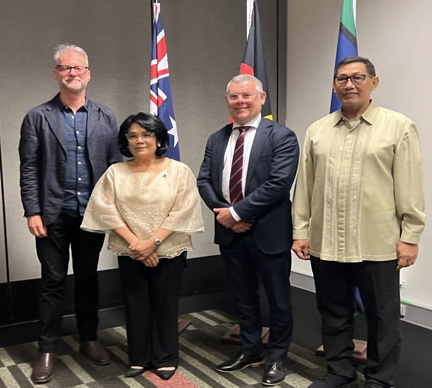 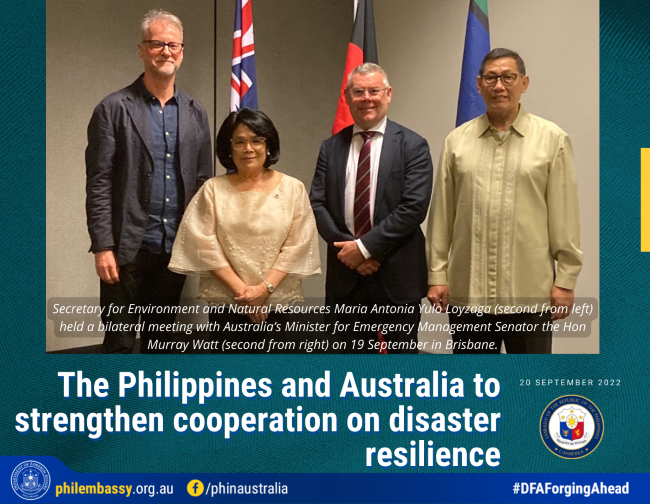 The Government of Australia and the United Nations Office for Disaster Risk Reduction (UNDRR) are co-hosting the APMCDRR 2022 from 19 to 22 September at the Brisbane Convention and Exhibition Centre. The Conference is the largest Asia-Pacific biennial gathering focused on disaster risk reduction, resilience, and the implementation of the Sendai Framework for Disaster Risk Reduction.

The two countries exchanged best practices in the delivery of disaster preparedness and response services and discussed developments in national efforts to address climate change and develop national resilience. Secretary Yulo Loyzaga talked about the importance of government engagement with the private sector to stop the cycle of merely responding to the damages caused by disasters. The Secretary underscored the importance of the commitment of the industry to embed resilience in its business framework.

Senator Murray thanked the Philippines for its leadership on disaster risk reduction and expressed Australia’s desire to pursue bilateral discussions on emergency preparedness and response. The Minister shared the recent establishment of the National Emergency Management Agency in Australia combining the National Recovery and Resilience Agency and Emergency Management Australia. The Philippines expressed keen interest on this development and looked forward to further engagement with Australia.

Secretary Yulo Loyzaga and Minister Watt reaffirmed the long-standing relations of the Philippines and Australia and committed to support efforts to advance the partnership to a strategic level.

Secretary Yulo Loyzaga was joined in the meeting by Undersecretary Raymundo Ferrer of the Department of National Defense – Office for Civil Defense. Minister Watt was joined by Senator Tony Sheldon, Australia’s Special Envoy for Disaster Recovery. 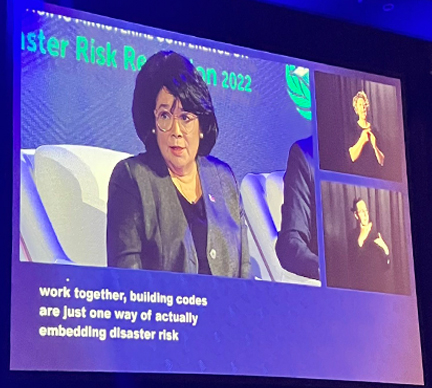 20 September 2022, BRISBANE – Department of Environment and Natural Resources (DENR) Secretary Maria Antonia Yulo Loyzaga is currently in Brisbane, Australia as the Head of the Philippine Delegation to the 2022 Asia-Pacific Ministerial Conference on Disaster Risk Reduction (APMCDRR). The delegation includes officials from the DENR, Department of Foreign Affairs, Department of National Defense - Office for Civil Defense, Department of Finance, and representatives from the private sector and civil society.

Secretary Loyzaga held bilateral meetings with leaders and dignitaries of other countries and international organizations. On September 18, she met with the Special Representative of the United Nations Secretary-General for Disaster Risk Reduction and Head of the United Nations Office for Disaster Risk Reduction (UNDDR), Her Excellency Mami Mizutori and UNDRR Regional Office for Asia and the Pacific Chief Mr. Marco Toscano Rivalta. During the meeting, Secretary Loyzaga underscored the commitment of the Philippine government to regional cooperation to strengthen capacity on disaster risk reduction and addressing climate change. SRSG Mizutori recognized the whole of society approach taken by the Philippines and congratulated the Secretary on the country’s successful model for public-private partnership on disaster risk reduction.

Together with NDRRMC Executive Director and OCD Administrator Undersecretary Raymundo Ferrer, she held a bilateral meeting with Australia Head of Delegation Senator Murray Watt, Minister of Emergency Management, and concurrently Minister of Agriculture, Fisheries and Forestry to discuss opportunities for collaboration between the two countries.

The Secretary also delivered the Philippine Statement in the Ministerial Forum held on September 19 and was a Panelist in the Plenary Session on Risk Informed Investments and Scaling Up Financing for Disaster Risk Reduction on September 20.###