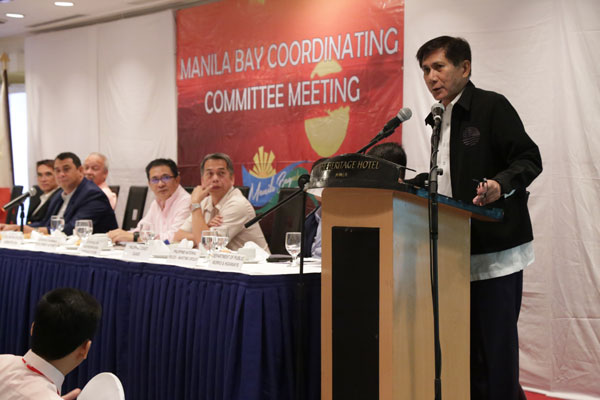 Environment Secretary Roy A. Cimatu (right) leads members of the Manila Bay Coordinating Committee (MBCC) in a meeting on December 11, 2018 in Pasay City to discuss next year’s plan to strengthen efforts to rehabilitate the historic Manila Bay. He also announced the creation of four positions for Community Environment and Natural Resources Officers (CENRO) who will be detailed in the local government units in the north, east, south, and the west part Metro Manila. The DENR heads the 13 mandamus agencies ordered by the Supreme Court to clean and bring back the Bay’s water to SB level – fit for swimming and other recreational activities. In photo are (L-R) Department of Health Undersecretary Marcwyn Bello, Mr. Arnold Villegas of the Philippine Ports Authority, DENR Undersecretary Sherwin Rigor, Mr. Virgilio Bombeta of the Local Water Utilities Administration, and Mr. Eric Capistrano of Metro Manila Development Authority. ###