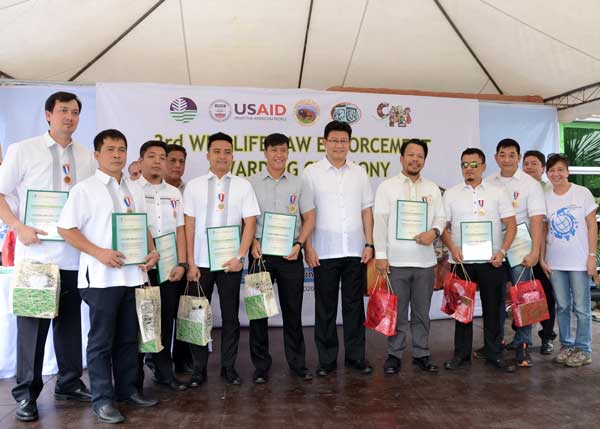 Department of Environment and Natural Resources (DENR) Secretary Ramon J. P. Paje (center, in eyeglasses) and Biodiversity Management Bureau Director Theresa Mundita Lim (right) lead the recognition of personnel of the National Bureau of Investigation (NBI) in the 3rd Wildlife Law Enforcement Awarding Ceremony held at the Ninoy Aquino Parks and Wildlife Center in Quezon City during the celebration of World Wildlife Day on March 3. The NBI personnel were instrumental in the conduct of three separate operations against suspected illegal traders in Pasay and Davao cities, leading to the confiscation of 163 heads of various wild fauna and the filing of criminal complaints against the suspects. ###