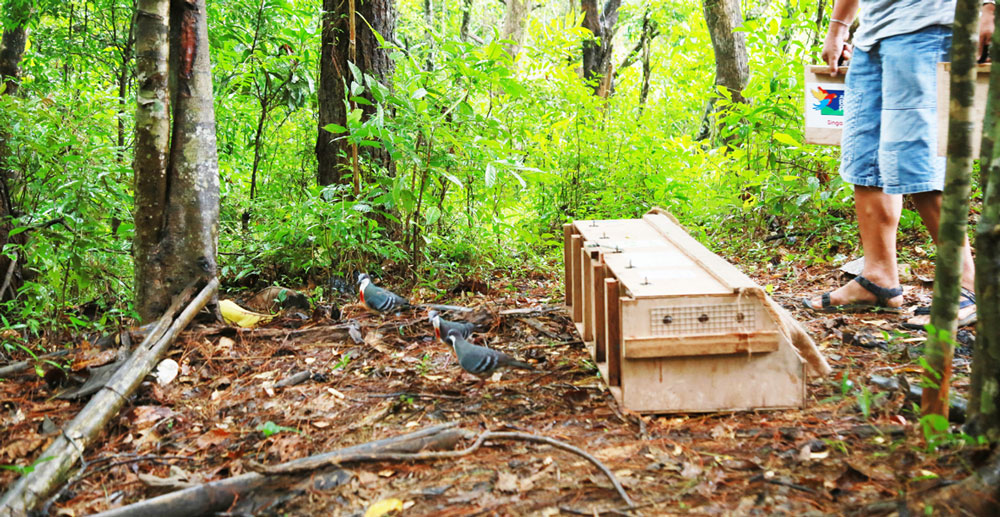 Three out of the nine Luzon bleeding heart pigeons step out of a wooden cage to return to their home in the wild as they will be released in Angat Watershed, Bulacan. Dr. Rona Rose Sinaon, resident veterinarian of the Department of Environment and Natural Resources (DENR) Biodiversity Management Bureau (BMB) Wildlife Rescue Center, and Mr. Anson Tagtag, chief at the Wildlife Conservation Section (both not in photo) facilitate the release of nine bleeding heart pigeons in the early morning of September 15, 2020. The Luzon bleeding heart pigeons (Gallicolumba luzonica) are progenies of two pairs of parental stocks of its species, which have been subjected to the captive-breeding program of DENR, Singapore Zoo, and Avilon Zoo. The parental stocks were originally under the care of Avilon Zoo before they were sent to Singapore Zoo in 2012. Endemic here in Luzon, the pigeons are listed as vulnerable under the national list of threatened fauna. The captive-bred bleeding hearts were released with the optimism that they would save the dwindling wildlife population of their kind.