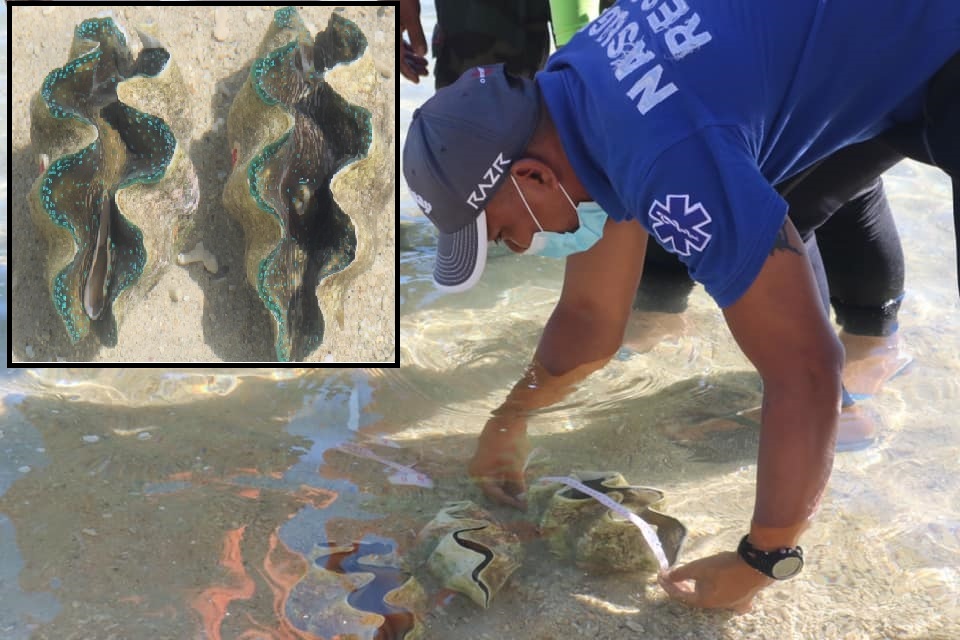 A Marine and Coastal Ecosystems Project staff measures Giant clams (Tridacna gigas, T. deresa, T. crocea) during the first day of clam planting on July 9, 2020 along the shores of Barangay Balaytigue in Nasugbu, Batangas. Calaca – Community Environment and Natural Resources Officer Isagani Amatorio led a team composed of representatives from Nasugbu Municipal Government, Punta Fuego Village Foundation and Homeowners Association, Hamilo Coast, KKK BLC Workers Cooperative, and the Bukluran ng Maliliit na Mangingisda ng Balaytigue in a 3-day (July 9-11) clam planting of 150 Giant clams in barangays Balaytigue, Papaya, and Calayo in Nasugbu, Batangas. Eight species of the 12 known Giant clams in the world can be found in the Philippines. Popularly known as Taklobo (inset), these 8 species of giant clams are declared as “vulnerable species” by the International Union for Conservation of Nature, and are seeded or raised in the country in laboratories to facilitate their growth and then planted afterwards in reefs with decreasing clam population.