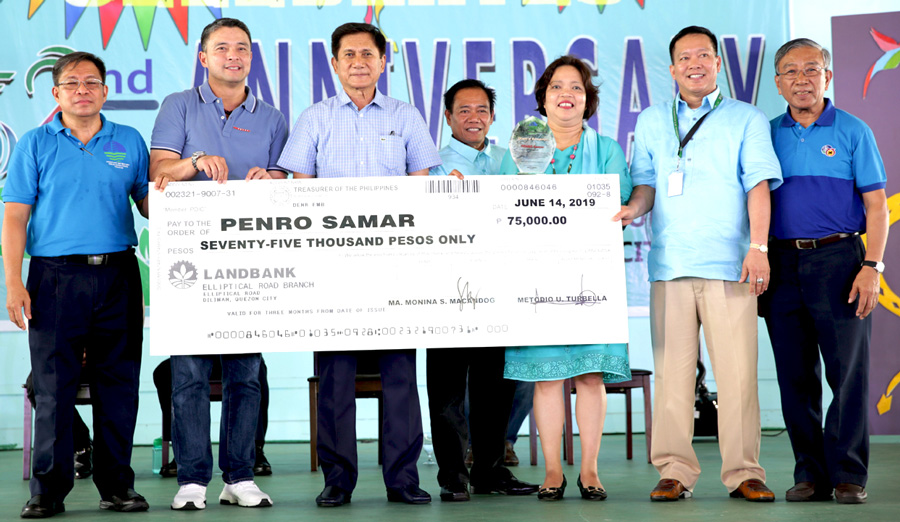 Environment Secretary Roy A. Cimatu (3rd from left), together with Undersecretary for Field Operations Juan Miguel Cuna (to Cimatu’s right), awards a check amounting to Php75,000 to CENR Officer-Catbalogan City Gene Tomas and PENR Officer for Samar Grace Gravoso (4th and 3rd from right, respectively) for their efforts in rehabilitating the Calbayog River. The field officials were accompanied by their Regional Executive Director for Region 8 (Eastern Visayas) Atty. CrizaldyBarcelo (2nd to the right) during the awarding ceremonies held in conjunction with DENR’s 32nd anniversaryon Friday, June 14, 2019, in Quezon City. The Eastern Visayas team landed second in the search for R.I.V.E.Rs (Recognizing Individuals/Institutions Towards Vibrant and Enhanced Rivers) for Life Awards. Also in photo are Assistant Secretary for Field Operations - VisayasMarcialAmaro, Jr. (left) and Undersecretary and Chief of Staff Rodolfo Garcia (right). ###